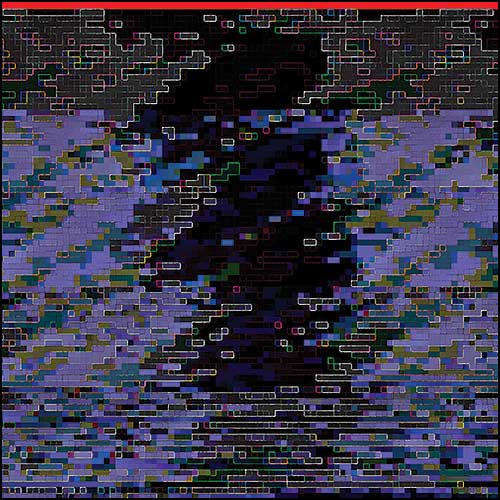 ‘Intro section from Everything Merges With the Night’ – 2003

For some of the pictures I have chosen very short sections and a treatment I feel appropriate to the music. For example, ‘Another Green World’ is from a short segment by Brian Eno, rendered in a very geometric manner. On the other hand, Nick Cave’s ‘The Weeping Song’ is the full piece, except the middle section (the central indentation) is cut and folded back over itself to make room.
Sometimes, in an attempt to maintain the stereo effect, the left and right channels are treated differently before combining, leading to a layered dual interpretation, as in ‘Everything Merges With the Night’ another piece by Eno.
Despite having taken these liberties, there is still a direct traceable lineage across the media from the digitally interpreted music to the final image.

At the heart of the transformations is the notion that these images are derived and created with, not just on a computer. Its intervention is crucially part of the final result, not a convenient way of achieving it. It is only with a computer that these images can be created.
The relationship between the behaviour of the digital medium, the recorded music and the resultant images remains ambiguous and unresolved.