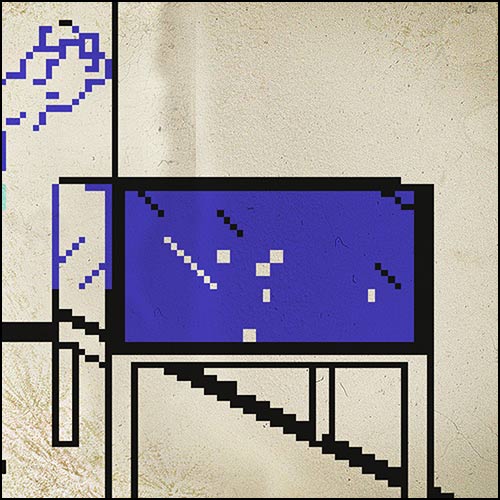 “It was for a brief moment a way of drawing on a computer that will probably never be attempted again.”

One of the first examples of displaying images on a computer screen using redefined text character sets. As the hardware of the day was unable to display pictures quickly, the computers’ faster, text only screen mode was used. Instead of conventional text being written to the screen the newly reshaped ‘alphabet’ was used to create the illusion of the final image. The technique was enhanced by the fact that up to 3 characters could be variously combined. As well as simple rotation a basic arithmetic logic was used to combine the characters. This was by addition, simply overlaying as a logical OR, by a type of subtraction, one character cutting into the next as a logical EXCLUSIVE OR and by selective addition as a logical AND.
Quite a few projects were accomplished this way. I got so used to it that eventually I could look at an image and ‘see’ the redefined characters and their orientation that I needed to assemble it.
It was for a brief moment a way of drawing on a computer that will probably never be attempted again. Artists today don’t know what they are missing!

The initial dates attributed to the Fantastic Four  location picture; ‘The Circus of Crime’  and the Spiderman detail; ‘Office window’ are the image creation dates and not the product release dates. The second date in brackets refers to the revisited image’s final update.