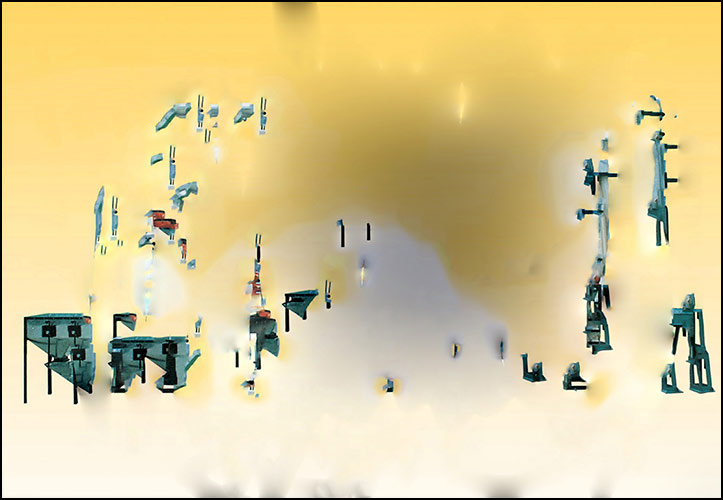 ‘Yeah, I am functioning within normal parameters’ – 2010

“We would say that describing is an important step to understanding.”

What is it all about?
There are many systems that shape our lives. For example language, religion or the concept of credit.
The importance of understanding the shortcomings and or limitations of such systems I think is beyond question. Technology is one such system.
Our art sets out to describe and better understand this important system. The principal approach is through exploring the limits and its implications by drawing attention to the boundaries, mostly indirectly.

What implications are you referring to?
We are not interested in chasing the cutting edge but rather exploring the edge of performance. Or the “Broken Edge” as we refer to it. This is when the system starts to become indeterminate, intent and effect become discontinues.
The images we create are purely a metaphor or an illustration, of the point of departure from the predictable.
We use metaphors to simplify complex structures and systems that would otherwise escape close examination.
The limits and where they are in powerful systems like technology has many implications and we intend to explore these.

Isn’t just looking at limits, whatever they are, also a bit limiting in itself?
If one is ‘just’ doing one single thing, you might have a point. The boundaries are everywhere, surrounding everything. If you think about it, actually the field is wider than any other.

You say you are exploring the limits, but why indirectly?
Sensationalising often clouds the issues. The excessive baggage can be distracting. Sometimes the indirect approach or the oblique view can be more revealing and rewarding. Everyone sees the train crash and the after effects but rarely notices the tracks. And yet they are what lead to the unfortunate event. Without the tracks the train wouldn’t even be there. Nothing is as astounding as the overlooked.
On the other hand, the danger of the indirect approach is misunderstandings.

What is your problem with technology?
We look at technology specifically through the resonances it creates, not simply dismissing or admiring it. We are not interested in criticising it, so we don’t have a problem. An example would be, when we try to describe or draw something, usually one starts with the edges, first map out the confines. The approach is to describe technology in this way, starting with the edges.
We would say that describing is an important step to understanding.

Science and technology have always fascinated artists.
It is easy to dismiss something when not aware of the context, or to look at a fragment of something without noticing where it might lead. The main body of technology has been a focus of interest for a very long time, you are right there. But we are not interested in technology itself only the effects on the medium it operates in. Or how the system or its symbols have their meaning altered, when it is translated into another medium.