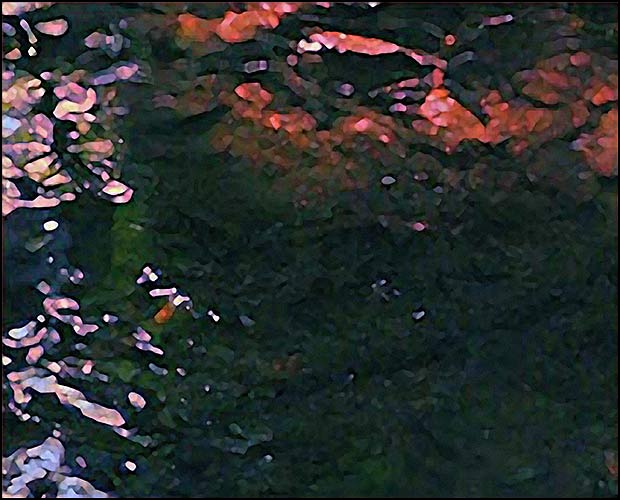 “Often we don’t value things mainly because we miss the context.”

How would you describe these images?
These computer paintings are derived mostly from looking very closely at small areas, post reworking.
Scale is an element that creeps into most work. Here the scale of things is the subject. Making them very large is a shift in scale only and yet instead of emphasizing the particular, the shift brings out the general. A specific leaf becomes a representation of all leaves. The shift is subtle perhaps but I like the transformation. With extreme enlargement the images seem to teeter on the edge of coherence. I like to explore this territory where the image is constantly flipping between recognizable and random shapes. Sometimes the forms almost make sense.

Are you suggesting there is a narrative linking the locations?
Not at all. Some aspects of my work, like the Little Big Pictures series, are not really about the actual image, place or situation. I’m not a story teller here. I think a visual narrative is usually imposed by the viewer when faced with ambiguous images. Coherence of the image is the real context for these paintings. On the edge of break up where the image just starts to loose its form.

So your work needs to be viewed in this particular context.
To me all art is context sensitive. There is nothing such as context free art. Its value and relevance is always relative to the times. Historic artefacts gain most of their value actually from this framework, the distance of time. That’s their context. Here, mine is exploring coherence of the image.
Mainly I’m thinking about how the finished work relates to the source.

And if we are ignorant of the context?
It’s very difficult to value something without knowing anything about it. To fully appreciate something, we need to have a perspective. That is fundamental to having an opinion.
What I’m saying is that often we don’t value things mainly because we miss the context.

What was the reason for the purely computer simulated scenes?
I modeled and rendered these from scratch, trying to recreate the original source material for my paintings. They were meant to be an alternative take on the initial photographs. Or perhaps just another way to get the computer to paint similar images.
I don’t think they are as successful.