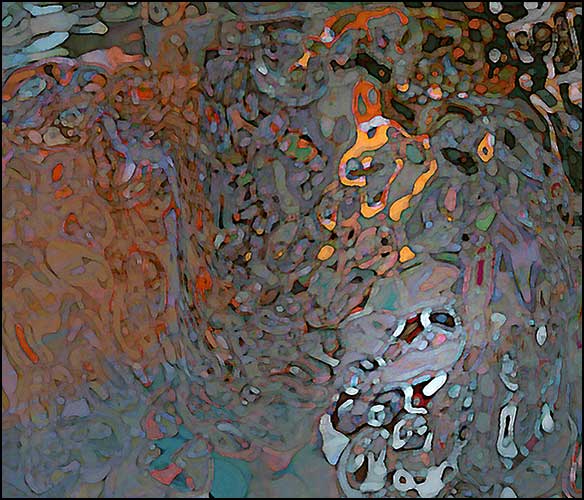 “Nearly all the work is based on revealing things that were not originally there.”

You have a lot of abstract pieces in your catalogue. Is this a different side to your work?
No, not abstract, they are all re-constructed. The raw material which is a digital photo is treated and processed, and then it is re-assembled with any lost information re-interpreted. Re-interpreting is not a process of abstraction. They probably just look like that at first.

Some look like very traditional abstract paintings.
It’s funny because they are completely products of the digital world, so unlike traditional painting. They are computer generated images, processed and exaggerated and redrawn. Nearly all the work is based on revealing things that were not originally there.

How can they be revealed if they are not there?
Actually I should have said ‘invented’ by the computer. There are always small inaccuracies and distortions in an image. As I work these inaccuracies get exaggerated. The desire to stretch the relationship between recorded and constructed images has led to a succession of treatments that almost completely overwhelm the initial image with artefacts. Normally computers are not very good at introducing random elements, by themselves. But when used outside their normal parameters, in a chaotic environment, the results are almost never repeatable. This is something like the medium interacting with itself, unpredictably.