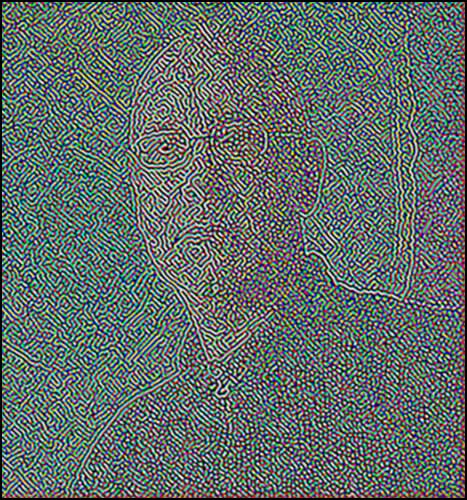 ‘Self portrait, first with a camera then other things’ – 2007

“These are not photographs of a subject but subjective imagery of photographs and the process.”

Why is what you do important?
I’m leading attention away from ‘things and what they are and their relationship to us’ and directing it at the very medium itself. How the message itself can be shaped by the medium that carries it. This to me is where technology exerts is insidious influence best. Examining aspects of information hygiene is fundamental to my work.
For example one important aspect of my pictures is about how images are recorded. Like a message in the noise. More accurately they are photographs ‘perverted’ by the medium. Sometimes when you try to hide something it actually becomes more conspicuous. Similarly this ‘perversion’ draws attention to the concerns of the photographic image and the technology behind it.

You don’t really think there is a message inherent in the noise?
No, of course not. We see only what we think we see. And there is really nothing in the shapes. We shouldn’t be looking at the shapes but at the fact that actual shapes are produced. I think this is a bit like the Rohrschach tests. I want to look at an ink blob and see an ink blob and then wonder why and how something dripped ink. Not what the smudge of ink is supposed to resemble.

Or similar to reading tea leaves. You are saying the message in the noise can only be noise and yet when looked at another way, certain things appear to be revealed.
Yes exactly. Technology copies something and produces a recognizable image but when stressed and pushed starts inventing artifacts, loses the plot and comes up with something unique and mostly unrepeatable. It is not a case of right or wrong – artistic liturgies. Not a case of hallucinating ‘meaning’, instead I want to show it like it is. What I’m trying to say is that my enquiries are not tenuously linked to the objects they create.

The pictures are all very self-referential; literally.
The final picture is a cumulative result of a great cascade of pictorial feedback and random events applied to an external input; the trigger image. Feedback by its nature is self-referential. I’m trying to look beyond what photography can record. These are not photographs of a subject but subjective imagery of photographs and the process.